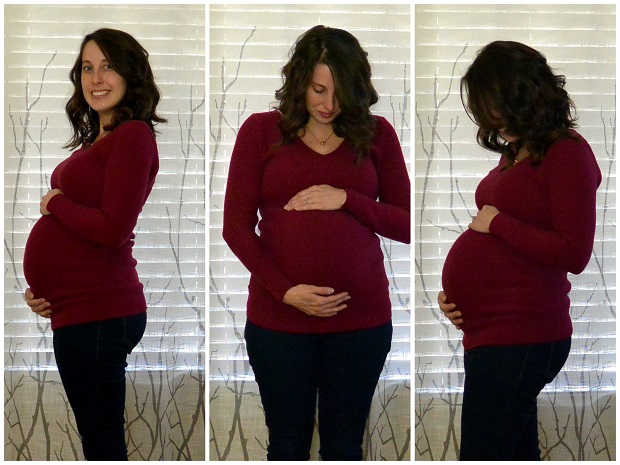 There are only a few more months to go before Nick and I have a baby. A son. A living, breathing little human that is going to be dependent on us for EVERYTHING. Holy Crap! In all seriousness, though, we’re getting pretty excited. And I’m getting a little nervous, especially about labor & delivery. I’m trying to remain calm and positive about it so I don’t freak myself out. The last thing I need is a traumatic birthing experience. To all the mamas out there, I’d love to hear about your positive experiences/moments in the comments! No negative or scary stories, please. It’s not good for my psyche.

On to the baby stuff…

baby size: Approximately 3.75 pounds (about the size of a large jicama or bok choy) and about 16.7 inches long. Although it still looks fairly small, my belly is measuring right where it should be at 32 cm (also known as fundal height).

cravings: Though not as intense, I’m still craving cereal and I eat a bowl (or two) each day. We’ve gone through A LOT of milk! Baby S should have the strongest bones on the block when we arrives. The past month I’ve been chowing down mostly on Rice Krispies cereal with bananas. I passed my gestational diabetes test (meaning I don’t have GD) but we discovered that I’m slightly anemic (losing iron to the baby) which is very common in pregnancy, so my doctor has advised me to add more meat, beans, and leafy green vegetables to my diet. No big deal. The good news is that Rice Krispies are enriched with iron so my bowl or two a day is probably helping. 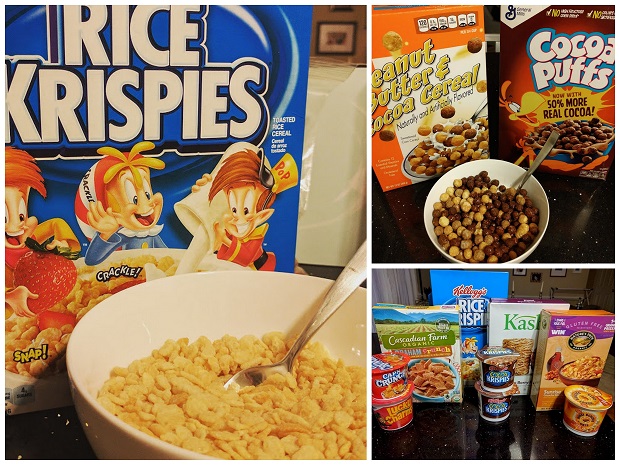 I have a serious cereal problem!

movement: Baby S is moving around so much! Before, I was mostly feeling him in the evenings but now it’s all the time: mornings, evenings, middle of the afternoon, when I wake up to pee in the middle of the night, when we’re in childbirth class… He’s even kicked my ribs a few times, which is painful. I’ll be sitting on the couch and feel a sharp jolt in my ribs that makes me jump. I gently ask him to kick somewhere else. Luckily, he doesn’t do that very often but I imagine bruised ribs all the same. He also gets the hiccups several times a day, usually after I eat a meal or drink something really cold. As weird as it is, I love feeling him moving around and I think that might be the only thing I’ll miss about being pregnant once he’s here.

miss anything?: I miss being able to comfortably bend over to do things like put on socks, tie my shoes, and pick up things off the floor. My belly is pretty big for my small frame and it’s been getting in the way of certain things. I also miss getting to wear all of my clothes! I have so many cute skirts and pants that just aren’t comfortable with my belly band. Same with some of my cute tops — they just don’t fit over the belly so they’re all just sitting patiently in my closet until I can fit into them again. I could purchase more maternity clothes but I only have a few more months and plenty of non-maternity things that fit, plus the budget could be better spent elsewhere.

how we’re prepping: We’re still working on the nursery, but we’re so close! We’ve had two small baby showers already with one more planned  for next month (which is a little embarrassing to admit that we’re having so many but it was really hard to get all of our people in one place at the same time) so we’re still stocking up. Most of the furniture is in and most of the decor is finished. We’re just missing a few pieces like a rocking chair/glider.

We’re also reading as many books and taking as many classes as we can. I’m actually really interested in Hypnobirthing so I’ve been reading books and resources on that method of pain management, and Nick has been reading books and articles about how to be a great support person (he’s going to be amazing, I know it). Last week we took a childbirth class, this week we’re taking a tour of the Labor & Delivery unit of the hospital and a newborn care class, and in a few weeks we’ll be taking breastfeeding classes. I’m learning so much!

looking forward to: Completing the nursery so we have one less thing I have to worry about. Feeling like I’m ready, although, will I ever feel ready? Probably not.

best moment so far: I already mentioned this last week, but I was concerned that I wasn’t gaining enough weight. My midwife said my belly and Baby S are measuring just fine, BUT I should start eating more peanut butter, avocados, loaded baked potatoes, ICE CREAM AND COOK OUT MILKSHAKES. Pretty much all of my favorite things… and it’s doctor’s orders! This pregnancy thing isn’t so bad. 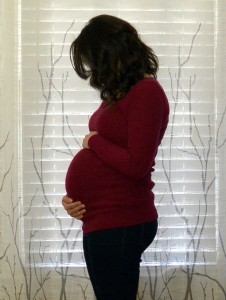