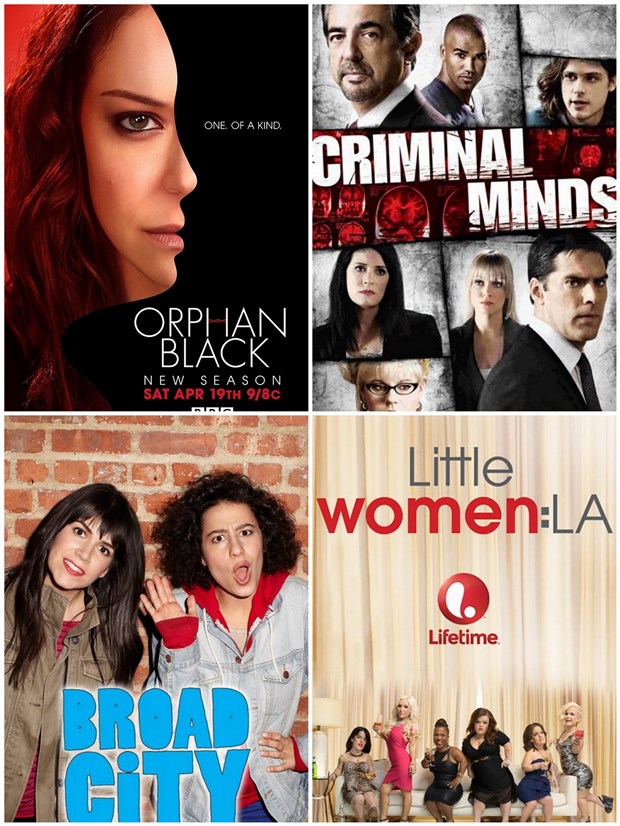 It’s time for another round of Friday Four, a fun survey I’m doing so that my readers can get to know me a little better. This week I’m talking about four TV shows I watch. I don’t want a ton of TV and when I do, it certainly isn’t Game of Thrones or even Scandal. (GoT is too violent and rape-y for me and I somehow missed the train with Scandal, Orange is the New Black, etc.) BUT the four shows I  never miss are as follows:

According to Wikipedia, Orphan Black “focuses on Sarah Manning, a woman who assumes the identity of one of her clones, Elizabeth Childs, after witnessing Childs’ suicide. The series raises issues about the moral and ethical implications of human cloning and its effect on issues of personal identity.”

The lead actor, Tatiana Maslany, plays the parts of ALL the clones. She’s so talented and mesmerizing that you totally forget that one actress is perfectly capturing all of the little nuances of each character. It’s currently in it’s third season but is available on Amazon Prime if you want to catch up.

Again from Wikipedia, this series “follows a team of profilers from the FBI’s Behavioral Analysis Unit (BAU) based in Quantico, Virginia. The show differs from many procedural dramas by focusing on profiling the criminal, called the unsub or “unknown subject”, rather than the crime itself.”

My undergrad degree is in Psychology and one of my dream jobs back then (I’ve had a ton of them because I have a ton of interests) was to become a forensic psychologist and do what they do. Alas, that dream didn’t pan out so I have to live vicariously through them. Nick and I started watching it from the beginning back in November and finally caught up in the middle of this season, which is it’s 10th season! I hope it never ends.

Described as “an odd-couple comedy about two best friends navigating their 20s in New York City. Abbi and Ilana are broke and flawed, and they don’t shy away from the sticky situations NYC throws at them — they dive right into the muck. No matter how bad it gets, these broads are always down with whatever hits them.”

They make me laugh so much and taught me that I have FOMO – fear of missing out. The second season just ended but you can watch full episodes on Comedy Central.

IMDB describes this reality series that “follows close-knit friends with big hearts and big personalities, who have a physical trait in common: They are little people. The ladies travel around Los Angeles while dealing with relationships, parenting and careers. As with any friends, they express feelings — from laughing, to crying, to fighting — but lend emotional support to one another. While dealing with everyday challenges, they are out to prove that — just as people say about age — “height” is just a number and being short doesn’t keep them from having normal lives.”

Terra, one of the ladies, has a spin off about her experiences with pregnancy and her first months home with the new baby.

I love all of these women and watching them navigate this things called life.

Parks and Recreation. This is my favorite show of all shows that ever were. Only a show featuring Shakira would bump Parks & Rec out of my #1 spot. Amy Poehler is my #2 favorite celebrity, after Shakira of course, and I would watch anything she does. It’s just a bonus that Parks & Rec is so good. (OMG, speaking of which, can someone make that happen, please? A reality show featuring Shakira? It would be heaven for me!) I’m so glad that they play reruns on both Esquire network and FX because we always end up there, watching it!

You’re The Worst. “Centers on two toxic, self-destructive people who fall in love and attempt a relationship.” – IMDB. There’s something about this show that I CANNOT get enough of. There isn’t a single character that I don’t like, even though I should.

Masters of Sex. Based on the biography of the real sex researchers, Dr. William Masters and Virginia Johnson, this show offers a fascinating look into how we know as much as we do today about the human sexual response. It plays on Showtime and is on it’s third season, which will begin this summer. My passion is sexual health education so it should come as no surprise that I would love a show dedicated to the pioneers. Also, I have an embarrassing crush on Michael Sheen. 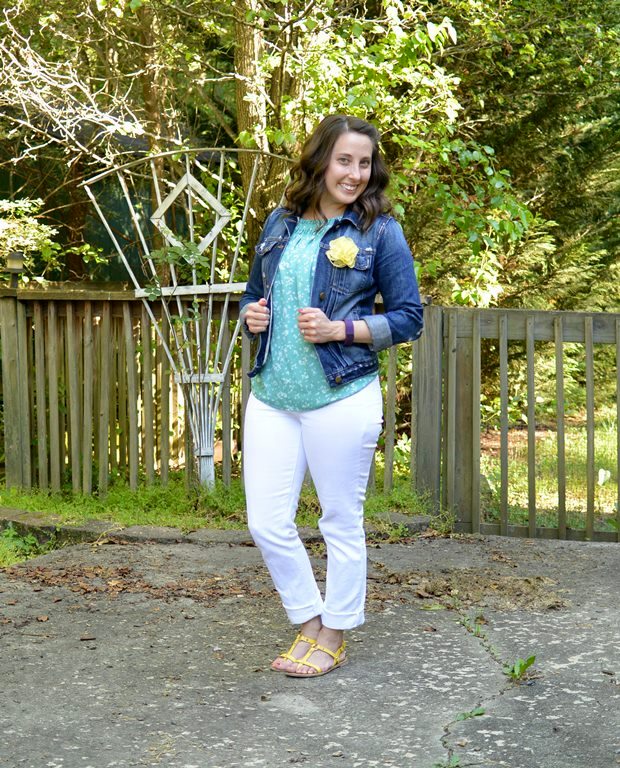 by Nikki No Comments

I wore this outfit to my very last day of graduate school. I had lunch with my work crew (my professor, classmate, and coworker) and then I spent the afternoon in the library, finishing up my last final, and I ended up at the bar with my best friend, enjoying some celebratory drinks. It was probably the best Monday ever! I was feeling very spring-y so I decided to pair turquoise with yellow, which I probably wouldn’t normally do, even though it looks great. Later that week, I switched out the white pants for white shorts and ran some errands and did some shopping in preparation for hosting my family for Graduation/Mothers’ Day weekend. 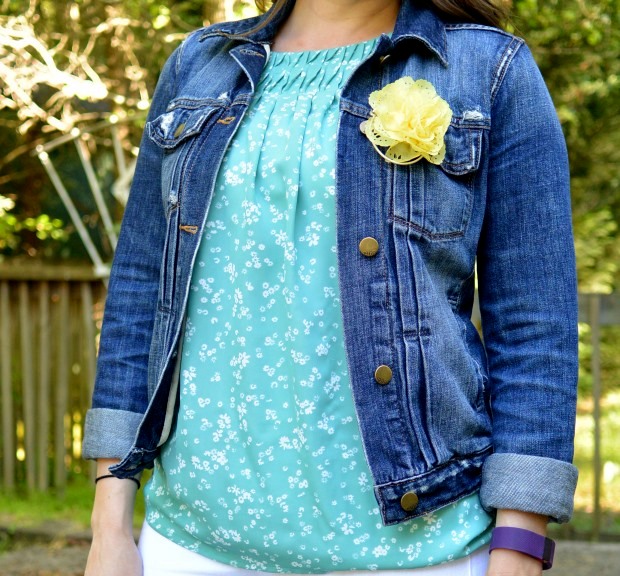 This shirt was a birthday gift from my sister-in-law. She has great taste, doesn’t she?! 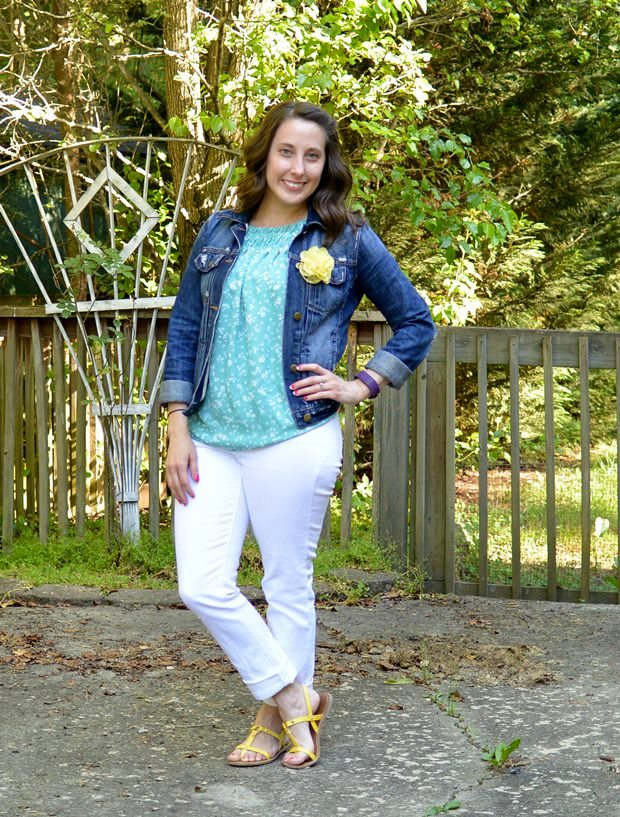 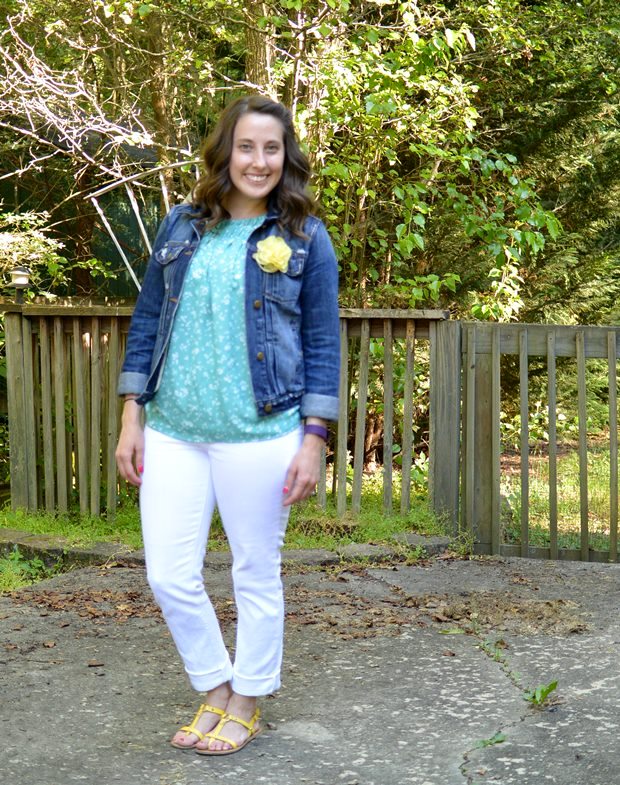 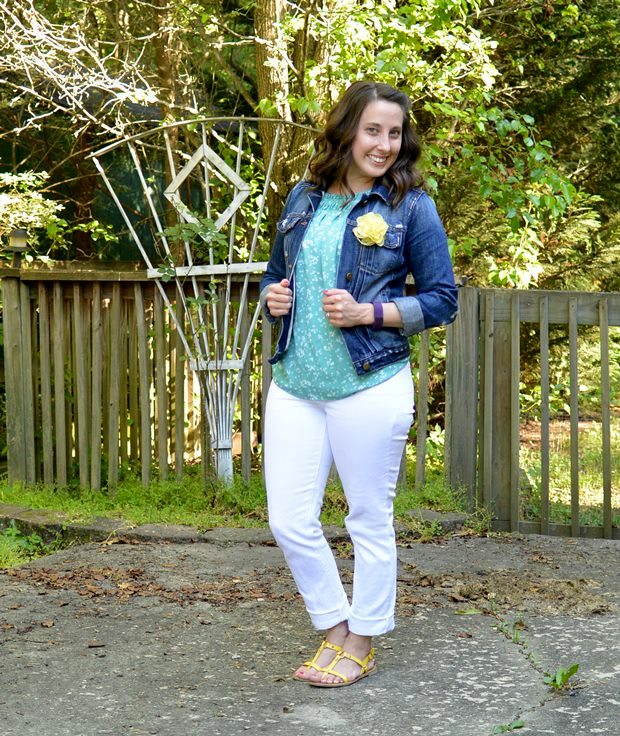 And here’s the fun one: I was running out of pose ideas so I just started twirling. It kind of looks like I’m surfing! I do wish I was at the beach right now… 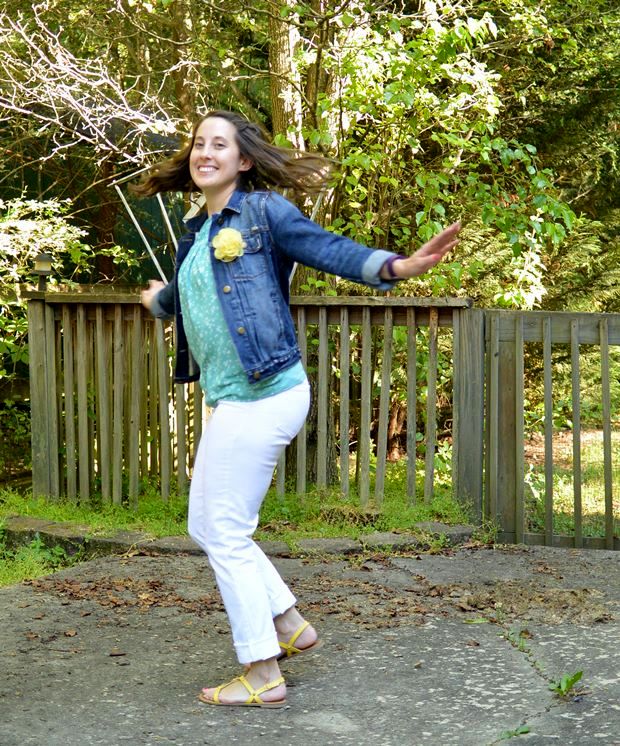